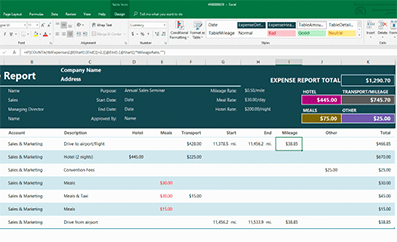 The 7 Biggest Excel Mistakes of All Time

Excel has dominated the spreadsheet market since the 1990s, and it remains a powerful tool for data analysis. Unfortunately, its very power makes it incredibly dangerous even in the hands of experienced users — and how many employees can truly claim to have mastered the program’s complexities?

If you use Excel expense-report templates in your business, it’s fatally easy for user error to creep into the process and skew the results, potentially costing your business money it can ill afford. Indeed, one study found that 88% of all spreadsheets contain one or more serious errors. If you think that sounds high, consider the following examples of how basic spreadsheet errors led to gruesome results for some of the largest and most respected institutions in the world — and what would happen if these same errors crept into your own Excel expense reports.In 2003, TransAlta lost $24 million due to Excel copy-and-paste error

Canadian power company TransAlta lost $24 million when an employee misaligned the rows in an Excel spreadsheet. The copy-and-paste error led to bids being aligned with the wrong contracts, wiping out 10% of TransAlta’s profit for the year with a quick click. Such an error in an Excel expense report template hopefully wouldn’t cost you millions, but it could definitely blow your expense budget for the quarter. For example, if your template has spending limits coded into certain categories, and those spending limits get misaligned, your employees could end up claiming way more in some types of expenses than you intended to allow.

In 2005, Kodak suffered an $11 million severance error due to Excel typo

Eastman Kodak Co.’s stock tumbled steeply in 2005, partly due to a last-minute accounting adjustment to correct an Excel error. In this case, the error was a simple typo: An employee added too many zeros to a particular severance accrual record, resulting in an $11 million overstatement. A typo like this would have clear and dramatic repercussions on an Excel expense report, although subtle typos are the most dangerous ones. After all, you’d probably notice at once if an employee filed an expense report claiming $11 million in office supply reimbursements. But if he had simply transposed two digits or put the decimal point in the wrong place, the error would be much harder to spot before issuing the reimbursement.

In 2008, Barclays Capital was forced to spend millions on worthless contracts due to Excel reformatting error

During the Lehman Brothers bankruptcy proceedings, Barclays Capital prepared an Excel report listing the Lehman Brothers contracts it intended to purchase. Unfortunately, some of the spreadsheet’s rows, which included contracts that Barclays did not intend to buy, were mistakenly hidden within Excel instead of being deleted. When the spreadsheet was reformatted as a PDF for the court, the new version included those rows — so Barclays found itself legally committed to making the purchases. Excel’s many formatting options add to its versatility, but in the hands of an average user, those options can be highly dangerous. An Excel expense report with hidden rows or columns could easily reveal those fields by accident, resulting in any number of potential errors. For example, if you’d hidden an expense category you intended to disallow, but then the column was revealed somehow, employees might make purchases expecting reimbursement — and be less than thrilled to hear that they wouldn’t actually get reimbursed after all.

In 2010, MI5 bugged the wrong phones due to a spreadsheet formatting error

A formatting error on MI5’s list of phones to be tapped resulted in the agency’s tapping 134 people entirely unrelated to investigations. The formatting error changed the last three digits of these phone numbers to 000 within the spreadsheet. As a result, random British citizens had their phones tapped by their government while the suspects went unobserved.Although it’s not clear just what the unfortunate MI5 employee did to produce these results, it’s pretty obvious what would happen if something similar affected your Excel expense-report template. For example, an employee might try to run a formula on the spreadsheet but use the wrong syntax, producing some potentially expensive results.

In 2011, AstraZeneca accidentally released confidential information due to an Excel templating error

Drug maker AstraZeneca was in the process of releasing its financial guidance reports at the end of 2011, part of which involved a “routine consensus collection process” and an Excel template. The template, which included embedded confidential company information, was then sent to analysts, along with the rest of the financial guidance package.Confidentiality is a huge issue for finance employees. If an Excel expense report accidentally includes sensitive details, such as an employee’s social security number or credit card number, and that spreadsheet ends up in the wrong hands, your business could face a painful legal and financial hassle.

In 2012, London Olympics were publicly embarrassed by a simple Excel typo

The London 2012 Summer Olympics organizing committee had 10,000 tickets to sell for the synchronized swimming event. Unfortunately, an employee missed a single keystroke and entered the number 20,000 into the spreadsheet instead of 10,000. As a result, the committee vastly oversold tickets to the event and was forced to admit its carelessness and make amends to thousands of ticket-holders. This kind of error can be extremely difficult to spot in an Excel expense report. For example, if an employee intends to claim $40 in expenses and accidentally hits the 5 key instead of the 4 key, you might never even realize that you overpaid him.

In 2012, JP Morgan was hit with $6 billion trading loss due to Excel copy-and-paste error

Financial giant J.P. Morgan’s infamous London Whale debacle was caused by none other than an Excel user error. It seems the company was using spreadsheets to create value-at-risk (VaR) models, and an employee copied the wrong information from one spreadsheet and pasted it into another. The resulting model grossly understated the company’s risk and was a major factor in its $6 billion trading loss. A finance employee processing multiple Excel expense reports could easily produce a similar error. For example, if your expense process includes copying the information from individual expense report spreadsheets and pasting it into a master spreadsheet, think how easy it would be to paste the right information into the wrong place.

Automation is the solution

Excel spreadsheets are prone to significant errors based on simple mistakes that could happen at any time. To protect your business from similar mistakes, invest in an expense system that’s been coded and reviewed by experts. Such a system greatly reduces the risk of user error, especially if it automates the bulk of your expense process. Here’s how automated expense systems can prevent some of the above errors:

As a bonus, professional expense systems can often integrate with general ledger platforms, saving you considerable data entry work (thereby further reducing the risk of user error in your books).