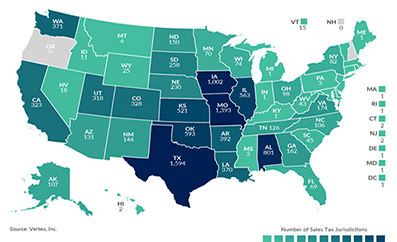 Sales Tax Just Got a Lot More Complicated: Are You Ready?

The recent Supreme Court sales tax decision - South Dakota v. Wayfair - has turned the sales tax environment upside down, and if you’ve been counting on the old physical presence rules to avoid sales taxes, you’re in for quite a ride. Many states have not yet established new standards in response to the SCOTUS ruling, but when they do, businesses that sell across state lines will almost be forced to automate sales tax calculations due to the rules’ increased complexity.

The past: Physical nexus

For decades, physical presence was the key determining factor for whether a company owed sales taxes in a particular jurisdiction. That’s due in large part to the 1992 Supreme Court case Quill Corp. v. North Dakota, in which Quill argued that it wasn’t responsible for collecting use taxes for North Dakota because it had no physical operations or employees in that state.The Supreme Court sided with Quill in that case, ruling that businesses aren’t responsible for collecting sales or use taxes unless they have a physical presence in that jurisdiction. This rule is now better known as “physical nexus.” According to the Quill ruling, you have a physical presence in a state if your business has an office or warehouse, keeps inventory, or employs one or more residents in that state.The physical presence nexus made it economically smart for remote sellers to choose locations that didn’t charge sales tax. For example, an e-commerce company could offer slightly better prices to its customers if it chose to keep all its warehouses and offices in Oregon, which doesn’t charge sales tax. This hypothetical e-commerce company would also have to hire only employees located in Oregon and other sales-tax-free jurisdictions or bring on freelancers if it needed staff in, say, California.Using this approach, the company would save money by not needing to invest in the tools, systems, and man-hours needed to calculate, collect, and pay sales taxes. That would permit it to shave a small percentage off its prices and thereby become more competitive or maintain its prices and enjoy a higher profit margin.The Quill ruling was based in part on the tax complexity produced by the enormous number of sales tax jurisdictions in the USA, and things have only gotten more complicated since. In 1992, there were over 6,000 separate sales and use tax jurisdictions; by October 2017, tax software company Vertex calculated that there were nearly 11,000.

The court supported Quill partly because it felt that requiring remote sellers to collect sales taxes for all jurisdictions in which they had transactions would have made interstate selling all but impossible, especially for smaller businesses.

Today’s Supreme Court wasn’t happy with the physical presence standard set by the Quill decision, despite the fact that sales tax jurisdictions are even more complex now than they were in 1992. The court hoped to find a new way to determine sales tax requirements that would be less arbitrary than the physical presence rule but still not place a huge burden on remote sellers. To that end, it invited legislation that would give it a chance to revisit sales tax determination laws – and South Dakota stepped up.In 2016, South Dakota enacted a new standard for sales tax nexus that used an economic rather than a physical requirement for businesses. Online home store Wayfair objected to the state’s new sales tax rules, and during the resulting court case, the South Dakota Sixth Judicial Court found in Wayfair’s favor. South Dakota appealed all the way up the ladder, and in January 2018, the U.S. Supreme Court agreed to hear the case.On June 21, 2018, the U.S. Supreme Court issued its decision in South Dakota v. Wayfair – in favor of South Dakota. The Wayfair decision found that “the physical presence rule of Quill is unsound and incorrect” as a determining factor and supported South Dakota’s new sales tax guidelines. Justice Kennedy wrote the majority opinion, commenting that:“First, the physical presence rule is not a necessary interpretation of Complete Auto’s [an earlier sales tax case] nexus requirement… Second, Quill creates rather than resolves market distortions…\ Third, Quill imposes the sort of arbitrary, formalistic distinction that the Court’s modern Commerce Clause precedents disavow in favor of ‘a sensitive, case-by-case analysis of purposes and effects.’”Kennedy noted that South Dakota’s economic nexus requirement was reasonable even for small businesses because it “requires a merchant to collect the tax only if it does a considerable amount of business in the State; the law is not retroactive; and South Dakota is a party to the Streamlined Sales and Use Tax Agreement.” He felt that these factors make economic nexus a viable alternative despite the tangled web of sales tax jurisdictions in the U.S.

South Dakota’s economic nexus standard sets a threshold of $100,000 in sales or 200 separate transactions per year to customers within the state. That’s a fairly high threshold considering South Dakota’s relatively small population. As the Wayfair case worked its way through the judicial system, a number of other states got to work on their own economic nexus legislation, often (but not always) basing their requirements on South Dakota’s.

Economic nexus will free businesses to set up facilities wherever they choose but will force them to establish strong transaction tracking and reporting systems. States are already beginning to set their own idiosyncratic thresholds, adding a further level of complexity to tax calculations. You can consult this economic nexus chart for an up-to-date list of sales tax thresholds by state.

The good news is that sales tax management software has come a long way since 1992. Here are a few of the top options for businesses with substantial interstate commerce.

AvaTax is one of the most comprehensive sales tax software programs. It provides complete sales tax, use tax, and VAT compliance and integrates with more than 600 different ERP, e-commerce, and accounting systems. The program works through a central console and has excellent reporting options. Pricing is volume-based and starts at $50 per year, making it suitable for businesses of all sizes.

Like AvaTax, Vertex has excellent integration with both ERPs and bookkeeping platforms such as QuickBooks; it can also be used as a standalone product. Vertex Cloud comes in three different product levels: Standard, which comes with complete rate lookup based on address; Professional, which adds some extra features such as custom scenarios and exemption certificate management; and Premium, which includes all the professional level features plus sales tax filing and payment remittance. Pricing information is only available upon request; however, the product’s base pricing is substantially higher than AvaTax’s, making it more burdensome for extremely small businesses.

‍TaxJar is designed specifically for e-commerce companies and integrates with the most popular e-commerce platforms, including Amazon, PayPal, and eBay. The program creates filing-ready sales tax reports for each applicable state and has an AutoFile option, making the sales tax return process substantially easier. TaxJar comes in Basic and Plus versions; the latter includes expanded support and account management options. TaxJar Basic starts at $17 a month for businesses with up to 1,000 transactions per month and scales up in price for higher transaction levels.Businesses with cross-jurisdictional transactions need to start preparing immediately for economic nexus. Just consider the earlier example of the Oregon-based e-commerce company. As states enact their sales tax thresholds, that company will have to scramble to set up a sales tax management system, track transactions to determine when it hits the sales tax threshold for a given state, and be able to switch to collecting sales tax on relevant transactions. It will also need to file sales tax and use tax returns with each jurisdiction. Developing and implementing all these processes is a huge burden, especially for a small company with minimal staff.

If your business sells a product or service that’s subject to sales tax in any jurisdiction, now is the time to prepare for the new sales tax environment. Study the economic nexus thresholds for states where you do business, and if you run the risk of hitting one or more of those thresholds, consider getting a sales tax management software system right away.

Assessing your options now will give your business plenty of time to establish a system and get familiar with its use before economic nexus becomes widespread.